Today, I am daydreaming about being back to Taiwan, but this time exploring nature in the southeastern coast far from the capital, such as the low-key county of Taitung.

I like nature that’s accessible from civilization. Where you can go out with a small bag and regular running shoes (maybe even slippers), catch the sunset, and be back in time for a dinner of beef noodles and warm bubble tea. I daydream doing this in Taitung + on some days, pedaling around many scenic bicycle trails and retreating peacefully to a little boho coffee shop by the sea.

This is the experience—rather, the character that Taitung evokes for me. The county is a fairly huge green region with quaint little towns, a good ways away from the capital Taipei and other major cities like Keelung, Taichung, and Tainan.

I was caught by Lonely Planet’s soulful description of Taitung City in its Taiwan guidebook:

❝ The sprawling county of Taitung has a modest charm that does not shout from the rooftops but rather unravels itself over a stay of several days.

The ocean, mountains, temple, cultural diversity and a strong indigenous presence together bestow a special atmosphere. Taitung’s streets smell of the sea and incense; the pace of life is slower. ❞

This description of Taitung City is so soulfully well-written and effective that, matched with Instagram photos of nice and sunny coastal roads, it made me daydream about Taitung. A small city that has been spared a bit of land ladled by the hulking green arms of nature that comprise most of Taitung County.

By the way, I grew up with the blossoming of Shan Cai and Dao Ming Si’s love story in Meteor Garden. Jerry Yan (Dao Ming Si actor) became my first obsessive celebrity crush as a young girl. And I still always go crazy at the mention of his name. So, it’s just right that Jerry Yan is on my playlist (rather, he is my playlist) when reminiscing and daydreaming about Taiwan. He was also the only one I was listening to as I enjoyed bus rides in and out of Taipei last year.

Many of my friends did not know that Jerry Yan was also a singer or that F4 was actually a male idol group in real life. In case you’re like them, I recommend listening to F4 on Spotify! Among Jerry Yan’s solo songs, my favorites are Other Half (一半), Gravity (地心引力), and Lost Love.

Switch Jerry Yan’s artist playlist on and daydream with me!

If you’re wondering, Kaohsiung is the nearest international airport to Taitung. And then, you could take a 2-hour train to Taitung City. There is the Taitung domestic airport, so that’s an option too, though I wouldn’t likely take it. From Taipei, the train takes 3.5 hours to Taitung.

Taitung as a county is actually a large place. You could stick to the sea or go deep into the lush forests and mountains. For this (day)dream travel, I would focus my trip in Taitung City and other parts of the county along the coastline—ideally on a bike or a scooter (if I learn driving by then) selecting routes that are close to the ocean whenever possible. I always love being between the ocean and the mountains.

I like traveling during months of cooler weather, so I would plan my visit around November, December, or January, when Taiwan is at its coolest. I like dipping my legs in a cold ocean. I love soaking in a hot spring too.

As Lonely Planet already pointed, a trip to this part of Taiwan should not be hurried. How many days would I spend on this trip? As many as possible. How nice it would be to spend several slow days in Taitung, not rushing and squeezing tours into every day.

Things to Do in Taitung, Taiwan

Most of the attractions of Taitung are centered on three things: nature, culture, and art. And these are also areas that I am most interested in. Food and coffee, of course, are always a given.

I imagine it’s not going to be as easy to go from town to town, but I would still prefer to go my own way rather than availing a guided tour. Although, there are pretty interesting ones you could find on Klook or KKday like stand-up paddleboarding (SUP), diving, and river tracing activities.

1. One of the first things I look at when I’m checking out a dream destination is the “bikeability,” if that’s even a word. And Taitung City is just perfect. There are many bicycle rental shops around the city, going as low as 100 NTD (3 USD/150 PHP) for a day. There are also a lot of routes to choose from, which go around and outside Taitung.

After learning about the acclaimed scenic Highway 11 of the east coast, I’ve discovered that there is already so much for me to discover if I just take this one route on a bike. On estimate by Google Maps, the section that runs from Taitung City to Chenggong takes about 3 hours to bike. Of course, for me there would be a lot of stops along the way, so one day is going to be just perfect to explore this long stretch of scenic highway.

I would get my bike from the city center and then cycle my way up north through Fushan Village (Beinan town), Dulan and Donghe Villages (Donghe town), and Chenggong town until Sanxiantan. I would most likely catch the sunset along the road as I make my way back to Taitung City. I wouldn’t really see the sun itself setting since I’m on the east side, but I’m sure the red and golden colors are going to splash all over my scenery.

It doesn’t have a lot of reviews on Google, but this kind of place somewhat entices me. It’s not sought after, usually passed over for the better beaches up ahead. But I sometimes find a kind of attraction for places and things that have been cast aside by other people for me to enjoy their stillness and tranquility, albeit somber. Shanyuan Beach had also been quite controversial with the construction of a hotel resort called Taitung Miramar, which now sits abandoned and ghostly in front of the beach. Maybe I like the eerie vibe too.

At the northern end of the beach are the Fushan Fish Reserve and some restaurants and cafes.

Coffee and art in one phrase? Say no more!

Another peaceful beach with a little sandbar still in the works by Mother Nature’s crew, and an old bridge with picturesque views.

In Chenggong Town: Sanxiantai and the Terrace of the Three Immortals

There are other biking routes I could take around Taitung City, such as the Liji Badland that unveils an ethereal “moon world,” and Taitung Mountain Ocean Bike Trail that loops around the city’s best spots such as the Railway Art Village and Taitung Forest Park.

2. Aside from the “bikeability,” a major attraction point for me is the density of coffee shops in a city. And in Taitung City alone, I’m definitely not going to run out of a happy cup of joe. I imagine biking on Highway 11 and catching sight of a rugged, exotically designed little coffee shop, maybe on the side of the road with tables that offer a front-view of the ocean.

“A rugged, exotically designed little coffee shop on the side of the road”—I scribbled this above before stumbling upon this small cafe and bakery + handicraft store on my little Google Maps tour. This is exactly what I daydream about!

Not a coffee shop, but another stop-worthy hole-in-the-wall just across Highway 11 from 85. It seems like a new business. I like the interiors and so far, it has good reviews about its specialty, wheat noodles. I could have coffee and bread as an appetizer at 85 and then come here for the main course!

3. Perhaps one of, if not the greatest charm of Taitung is its mighty preservation of its indigenous culture and communities. There are various tribal groups in the region, and there is a lot to learn about them. Museums are scattered around Taitung to tell the story of the ethnic folk, which goes back as far as the Stone Age. But it doesn’t sound so enticing to just peruse or listen to a chronicling of each tribe’s tradition, does it?

Indigenous culture becomes more fun and riveting to learn about when you combine it with a showcase of the people’s arts and crafts as well as cuisine. So, I would combine my learning about ethnic culture with an exploration of the local art scene. There are tribal villages around Taitung that host immersive activities and accommodate visitors for a nice meal. Perhaps the most popular of which are the Amis tribal villages in Donghe township. The Amis are the largest indigenous group in Taiwan and are native to the eastern region.

Many historical or old sites in Taitung have been transformed into a hub for artisans and local gourmets, such as the Railway Art Village, Taitung Sugar Factory, and Dulan Sugar Factory.

Pisirian tribe in Chenggong (near Sanxiantai)

4. And then, there’s food! Taitung also offers something unique when it comes to food. Even before getting to this point, we’ve already touched on the taste of this region above—the little shops and eateries tucked secretly in some corners of the town, the indigenous communities that serve home-cooked meals. The latter is the one I definitely would not miss out on. What’s great about this is you get a farm-to-table kind of experience, not to mention homey and unfussy.

As for the usual, my favorite Taiwanese food items are beef noodles, dumplings, boba tea, and sweet tofu desserts. Not very exciting, is it? Lol! But they’re my favorite, and I’d definitely have them where I find them!

Where to Stay in Taitung, Taiwan

Before I began to browse Airbnbs and hotels in Taitung, I thought there would be few options considering it’s not as buzzy as other tourist-drawing cities in Taiwan. But no, there are many and it shouldn’t have come as a surprise because Taitung has been flocked by expats, artists, hippies, and free spirits, who have put up their own cafes, art spaces, and of course—guesthouses. And their personalities really come out in the design of their accommodation spaces—rich, colorful, eclectic. Some subdued, some loud.

A modest home with a boho taste, the owner’s personal touches
Airbnb

I just love the cozy simplicity of this one, and that eye-catching oversized wooden bed frame! It’s a little outside the city center of Taitung, about 30 minutes by bicycle. 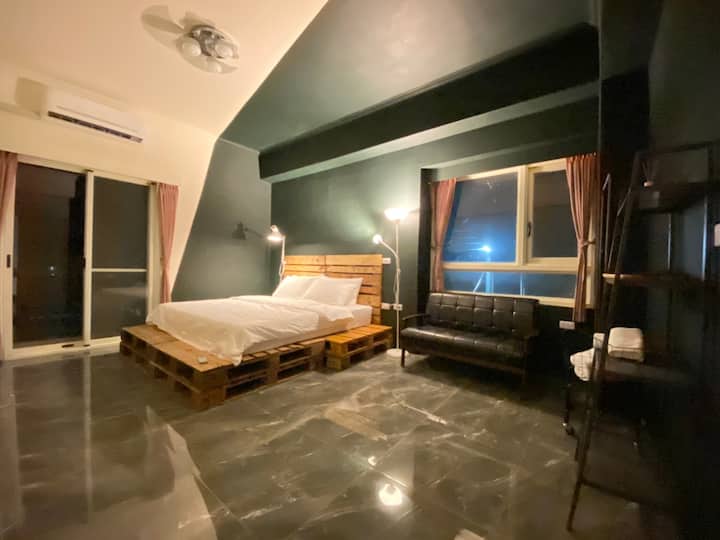 I just really find industrial-designed rooms so attractive! I like the neat, minimalist and airy design of this room. 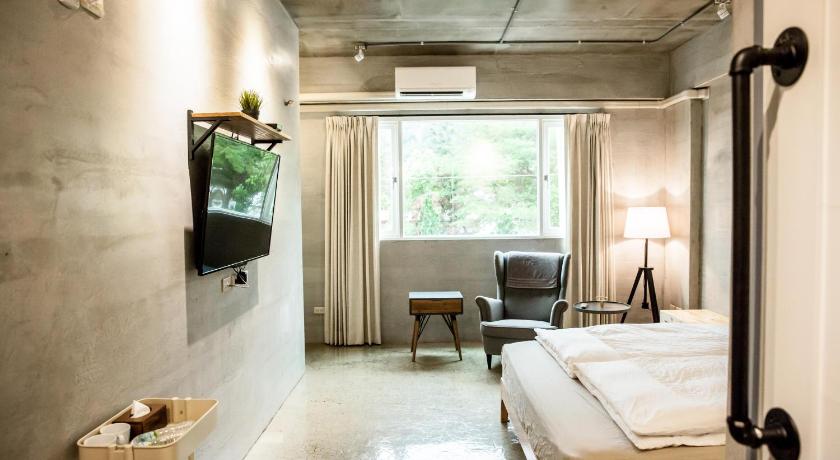